Sign vinyl is cut using a machine called a plotter which typically connects to a computer that has graphics software installed. The software produces grapchics called vectors which geometric primitives such as points, lines, curves, and shapes or polygons—all of which are based on mathematical expressions—to represent images in computer graphics

The great thing about vector graphics is they can be magnified infinitely without any loss of quality, while pixel-based graphics such as jpgs or gifs cannot.

"Calendered" vinyls are manufactured differently, using a rolled or extruded process. This results in the vinyl recieving more stress during manufacturing resulting in less dimensional stability in the direction it was rolled. It is much cheaper to manufacture than cast films though and is widely used on general signage. Calendered vinyls are either 'monomeric' or 'polymeric' dependent on the plasticiser's molecular structure.

There are 3 main different types of vinyl, they are;

3. Cast vinyl
These vinyls are the most expensive of the three mentioned here, they are made by pouring resin on to an extremenly smooth surface to form a very thin layer before going through ovens which facilitate the curing process. Cast vinyls generally have better dimensional stability, UV stability and colour pigment along with higher gloss levels. 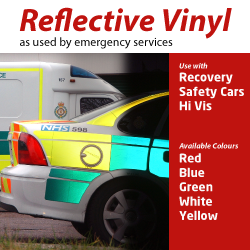